Marsh Founder and Industry Veteran, the Beloved Ruth Stricker, Passes Away at 85 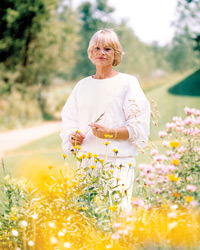 MINNETONKA, MA - March 12, 1935 - April 14, 2020 - Ruth Ann Stricker of Deephaven, Minnesota, passed away peacefully on April 14, 2020. Connected in love and gratitude for her immeasurable contributions over the course of a remarkable life, Ruth's family, friends and professional colleagues around the world honor this visionary of the health and wellness industry. Founder of The Marsh, A Center for Balance and Fitness in Minnetonka, Minnesota, Ruth was an industry icon and pioneer in mind-body work. She integrated Eastern and Western practices in her personal and professional life, her philosophy offering a "liberal arts approach to health." In Ruth's words, "The resiliency of the human spirit makes it possible for us to find a sense of wellbeing in our lives... that our challenge is to be emotionally resilient and physically healthy to handle change and stress." Ruth believed, "health and fitness are not the chief goal in life but rather the potential to be good citizens of the earth."

The daughter of a Presbyterian minister from Windom, Minnesota, Ruth graduated from Macalester College in St. Paul, Minnesota in the 1950s. Her unique educational studies culminated in a double major in physical education and religion affirming the foundation for her future life work and community leadership. Ruth began her career as a Health Education and Youth Camp Director. She then began her journey as an entrepreneur, leading group fitness classes and pioneering her studies of mind-body interactions associated with exercise and cognitive components, which made way for new directions in health and fitness. Under her leadership, class participants found so much more than physical experiences with her charismatic energy and sharing of her many life lessons. During this time, Ruth was diagnosed with Lupus, which evolved into a lifelong process of helping others. It transformed her leadership into empowerment with a message... that she was a well person in a diseased body. Ruth's pioneering blend of mindful exercise was soon acknowledged by medical professionals as the beginning of the mind-body movement.

In 1985, Ruth founded The Marsh, A Center for Balance and Fitness, in Minnetonka, Minnesota. Blending allopathic and alternative disciplines, The Marsh opened with an acupuncturist and a cardiologist working side by side... a blending unheard of 35 years ago. The Marsh stands alone as a comprehensive center of innovative programming and services, welcoming all. Dr. Andrew Weil has described The Marsh as "a center of the future... a combination of spa, hospital and health club."

Always at the leading edge, Ruth sponsored a three-year research project on mindful exercise in collaboration with James Rippe, M.D. from the University of Massachusetts Medical School, Herbert Benson, M.D. from The Mind/Body Institute at Harvard Medical School, T. George Harris from Psychology Today and American Health magazines, and The Marsh. This project was the largest of its type ever undertaken to explore mind-body interactions associated with exercise. In August of 1992, its findings were announced indicating that combining exercise with a cognitive strategy is superior to exercise alone in terms of promoting psychological benefits.

Ruth's history of leadership and contribution was diverse and global, spanning health education, the fitness and spa industries, medicine, the arts and culture. She generously lent support to groups, causes and hurting individuals where she felt called to make a difference.

In the former Soviet Union, Ruth and her late husband, Bruce Dayton, traveled extensively in Moscow, Kiev and Leningrad with professional exchanges in each city. She was asked by the Ministry of Health to advise and teach on chronic health conditions and assisted in establishing a wellness center in the Crimean Peninsula for patients with chronic conditions. As a result, a number of young physicians from the former Soviet Union came to The Marsh for training, describing The Marsh as getting "happiness lessons."

Ruth and Bruce made more than a dozen trips to the People's Republic of China. They funded a three-year research project at the Beijing Institute of Technology to study Qigong and Tai Chi as it relates to general health and specifically to recovery for cancer patients. On another trip, Ruth traveled to Shanghai with 18 health professionals to study the healing aspects of Chinese medicine and exercise.

Ruth supported Architects for Peace through Relationships and Knowledge (ARK), an international youth group that aspires and works to achieve global peace. The organization leads peace-building summits around the world with youth members representing 18 countries to foster sustainable bonds between young people whose mission is to build a better world.

In 2018, she was honored with the Board of Trustees Award for Meritorious and Distinguished Service at her alma mater, Macalester College, where the Ruth Stricker Dayton Student Center was named in honor of her lifetime achievements. As a patron alumnus, Ruth helped welcome the former Secretary General of the United Nations, Kofi Annan, when Macalester renamed the Global Institute for Citizenship to the Kofi Annan Institute for Global Citizenship.

Ruth was an Honorary Board Member and "Luminary" of the International Spa Association Foundation. A passionate innovator for over three decades, Ruth had a significant influence on the spa industry with her "liberal arts approach to health." Former ISPA Chair Jeff Kohl said when Ruth won the 2004 Alex Szekely Humanitarian Award, "Ruth's commitment to health and wellness is profound and an inspiration. She was a driving force behind the evolution of people no longer seeing spas as pampering, but instead as a requisite to staying physically, emotionally and spiritually healthy. The promotion of lifestyle behavioral changes that contribute to longevity and quality of life is not only something that she is passionate about and works toward; it is something that she and her life's work embody." Often referred to as "the conscience of the spa industry," Ruth was an inductee of the Washington Spa Alliance Inaugural Hall of Fame.

Ruth and Bruce generously supported the Abbott Northwestern Hospital Foundation. She contributed to the Minneapolis Heart Institute Foundation supporting heart research, women's heart health, vascular programs and internship programs. Ruth and Bruce were among the Founders of the Bravewell Collaborative, a community of leading philanthropists who work together to transform healthcare and improve the health of the public through integrative medicine.

Ruth and Bruce gave generously of their leadership and resources to the Minneapolis Institute of Art where Bruce was a trustee for 73 years and donated more than 2,000 works of art. Originally inspired by Ruth's studies in Eastern philosophy, Bruce and Ruth made several trips to China with MIA's Chinese Art Curator Emeritus Robert Jacobsen to systematically develop the museum's Chinese art into a world-class collection of more than 1,400 items that fill 14 galleries. Ruth and Bruce also sponsored shows at the China Institute in New York and gave generously to the art museum at Yale University where the Asian galleries were renamed in their honor.

A champion of the arts and humanitarian causes for decades, Ruth was an Honorary Board Member of St.ART, a creative festival in St. Louis that harnesses the power of renowned street artists to celebrate diversity, bridge socio-economic and racial barriers and unify the community.

She funded the production of several independent short films that seek to inspire and uplift in the face of life's harsh realities. The first, Grandfather's Birthday, a moving story about aging, has won 23 international awards including a regional Emmy. Another film, The Wagon, whose central character is a young adult living with Down syndrome, premiered in 2019 at the Minneapolis/St. Paul International Film Festival. The Flow, a full-length documentary still to be released, features Tai Chi Master Chungliang Al Huang. Finally, in cooperation with Gilda's Club, Ruth supported the documentary LISTEN/Stories of Cancer and Resilience. She has also given generously to Gilda's Club.

Ruth worked with and mentored inmates at a Federal Prison Camp to develop a Positive Attitude Development Program which is now available online. The program is successful in rehabilitating inmates, and assisting their transition to the outside world.

Preceded in death by her beloved husband Bruce B. Dayton, and her parents Eleanor and Peter DeBeer, Ruth is survived by her daughter and son-in-law Kim and Bob Griffin; grandchildren Grace and Jack; son Mark Stricker; brother and sister-in-law Paul and Kathleen DeBeer; former spouse David Stricker; and her ever faithful yellow lab, Beau. A gathering to celebrate Ruth's wonderful life will be held at a later date. In lieu of flowers, please consider making a donation on her behalf to Interfaith Outreach (iocp.org) or the Lupus Foundation of America (lupus.org).