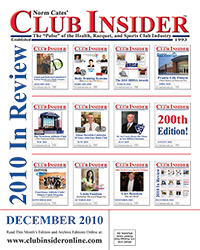 It feels like it was yesterday that I wrote, "Another year has flown by," in our 2009 In Review report. Well, now, it's the end of 2010, and it's time to review everything covered in Club Insider this year. As always, we worked very hard to produce a set of valuable cover stories, featuring amazing and successful individuals within the industry whose stories can help others in the industry. Our growing team of Contributing Authors presented many great articles on a variety of topics, any one of which can help your club business thrive and grow. We reported industry news as it happened, and of course, Norm Cates provided another full volume of Norm's Notes, reporting the inside scoop on news affecting the industry, offering commentary and opinions, as well as honoring those that our industry and this world lost in 2010.

A Summary of Our 2010 Cover Stories

In January, we featured Lloyd and Roberta Gainsboro's Dedham Health and Athletic Complex. Coined "A Jewel In New England" by Norm Cates, this facility is a very unique sight to behold, and like Phil Wendel's Atlantic Coast Athletic Clubs (ACAC) chain, they have had great success in the area of Medical Fitness. Lloyd and Roberta, along with Phil Wendel, were awarded the John McCarthy Visionary of the Year Award in March at IHRSA 2010.