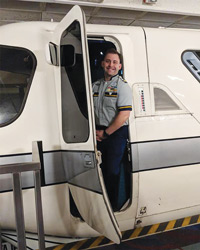 JUSTIN CATES, my fine son and multi-talented partner in Club Insider, has something very, very special going on in his life. Let me explain. When Justin was seven years old, we took him to Walt Disney World in Orlando, Florida, and we had a fun and amazing visit. He fell in love with the place, especially the Monorail System. Fast forward 27 years to October, 2019... Almost two years ago, Justin moved to a suburb of Orlando and got a great "Hobby Job" at Disney World. Don't be alarmed. He has been and is sticking with his Club Insider work. He calls Disney a "Hobby Job" because when he started at Disney, he did so simply to get out of the house regularly, since he works from home to produce Club Insider.

As I said, of course, he will continue his work on Club Insider because that's very important to all of us. So, he's going to be working a lot of hours... But, Justin's a tough and very hardworking cookie, and I've total faith in him being able to do both jobs and do both of them very well. He definitely loves both, and that's a beautiful thing! STAY TUNED, Folks!