Winning The War On ALS!

When you have a wife who has been a tower of strength and shown more courage than you dreamed existed; that's the finest I know. So, I close in saying that I may have had a tough break, but I have an awful lot to live for. 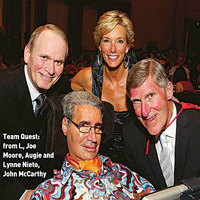 In March of 2005, Augie Nieto, a legend of the health and fitness club industry was diagnosed with Amyotrophic Lateral Sclerosis (ALS), also known as Lou Gehrig's Disease. After a very difficult time accepting the diagnosis, Augie realized that he, like Lou Gehrig, had an awful lot to live for. He came back stronger than ever with a new passion and goal in life, defeating ALS. At his side has been a true warrior and comrade in arms, with more courage than anyone could dream existed, his incredible wife, Lynne. Together, they set out on this journey. Now, nine years later, what a journey it has been, and you could say the destination is on the horizon!

Augie, with the love of family and friends, the help of thousands of business colleagues and the support of millions affected by this movement in one way or another, is tipping the scales back in the favor of anyone who has been diagnosed with ALS. This is something victims of the disease, dating all the way back to the 1800s, have never had before. For them, the playing field is once again becoming level. That is world-changing, and it is an incredible thing to think about.

ALS became known as Lou Gehrig's disease because of his high-profile diagnosis in 1939 and subsequent death two short years later. Sadly, he became the poster subject of those afflicted with a malady that had no cure and was essentially a death sentence. Now, because of the incredible initiative known as Augie's Quest, a cure will be found. When that cure does exist, it will be known as Augie's Cure, but within it, it will be a cure made possible by everyone who has helped Augie's Quest in some way. Together, we will have changed the world forever, showing how one industry came together to put a stop to a horrific disease and succeeded in doing so. There is no better cause than that.

Over the years, since Augie's diagnosis, in Club Insider, we have tried to do our part to help Augie's Quest. This has come in the form of donating advertising to the cause, as well as providing progress reports and writing several feature stories. In this month's edition, we are proud to bring you an in-depth interview with Augie and Lynne Nieto, who will take you through their story, from the diagnosis to the progress being made today. We also spoke to John McCarthy, Chairman of the Bash for Augie's Quest; Mike Grondahl, Founder and former Co-Owner of Planet Fitness, who gave an incredible $250,000 donation at this year's Bash; Pat Laus, who with Kevin McHugh, is responsible for the incredible Clubs for the Quest effort; and Joe Moore, President and CEO of IHRSA.